Protecting the health of workers is a crucial factor in maintaining a productive workforce. However, this objective remains inaccessible for many Americans due to the lack of universal access to paid sick leave. Over 40 million American workers still do not have access to paid sick leave and face the dilemma of either taking an unpaid day off or working while sick, thus risking their economic security, reducing workforce productivity, and threatening the health of co-workers and customers.

In 2011, Connecticut became the first state in the country to pass legislation requiring employers to allow workers to earn up to five days of paid sick leave. Both full-time and part-time workers earn one hour of paid sick time for every 40 hours worked. Unfortunately, the law only covers businesses with 50 or more employees and excludes manufacturing establishments. Nevertheless, many part-time workers in health care, hospitality and retail gained access to paid sick days. Eileen Appelbaum and Ruth Milkman surveyed Connecticut employers a year and a half after the law went into effect to learn how employers were impacted by the statewide paid sick leave legislation. Nearly two-fifths of workers at establishments that participated in the survey were employed part-time. Table 1 and Table 2 illustrate how paid sick leave law impacted the state’s businesses that were covered by the measure. 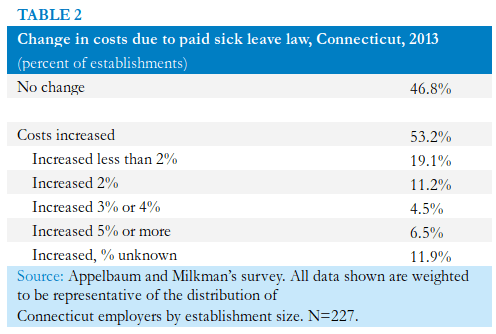 Many employers feared that their workers would abuse the paid sick time, but Appelbaum and Milkman found those claims to be unfounded. As shown in Table 1, only about 65 percent of employees used any paid sick leave and, on average, those who used paid sick days used only four days. Half of workers who used paid sick days used three days or less. In Table 2, 47 percent of employers surveyed saw no added cost after the implementation of earned paid sick time at their establishment and about 30 percent saw a one-time increase in labor costs of 2 percent or less. Another 11 percent did not bother to track the effect on labor costs.

Appelbaum and Milkman also found that women and immigrants were overrepresented among part-time workers at these establishments. The inclusion of part-time workers in earned paid sick leave laws in cities, states, and or on a national level, could have a major, positive impact on both groups.

The law extended access to paid sick days to a million-and-a-half workers in New York City who had been unable to take paid time off when they or their child was ill. For employers, the law proved to be a non-event.
In New York City, 86 percent of employers reported no increase in labor costs as a result of the paid sick days law. Not surprisingly, three-quarters of the city’s employers reported that they were supportive of the paid leave law – more than half of employers were very supportive. Table 3 highlights employers’ support for the New York City paid sick leave law.

Allowing employees to earn paid sick days not only benefits them and their children, it helps preserve public health and workforce productivity without unduly burdening employers. We all get sick and deserve to be able to take time to recover. No one should have to decide between their paycheck and their health. The adoption of universal paid sick leave legislation would help meet the needs of millions of US workers who currently have no paid sick days — especially part-time and low-wage workers — at little cost to their employers.

Want to get news?

We post economic related journals and reports for your kind consumption. If want these reports delivered to your inbox, kindly join us by filling the form! 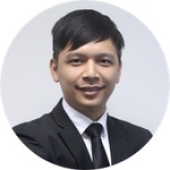 Commercializing and enhancing the potential of Cajuput oil